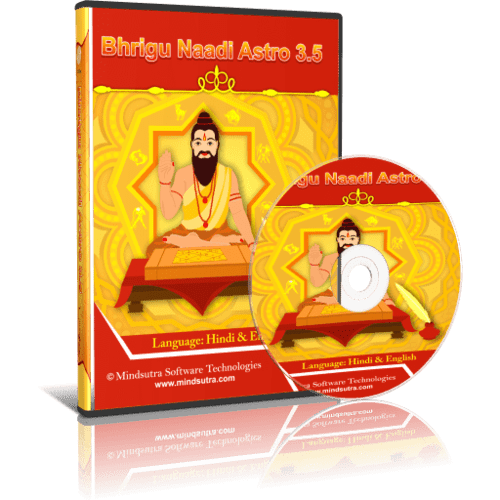 Bhrigu Naadi Software is based on both the systems of R.G. Rao sir and traditional Bhrigu Transit System of all planets. A lot of predictions are also there based on true Bhrigu astrology Chart Analysis and Bhrigu Yoga. A detailed list of traditional Paryaya of major planets based on Nadi transit and actual Transit. Bhrigu Prashna etc.

It is very natural that Nadi Literatures immensely attract the attention and interest of any advanced student of the sacred subject of Astrology, and of any serious researcher in the field. There are more than 24 "Nadi Granthas" available in various parts of South India; most of these have still been lying in the form of palm-leaf bundles written in Sanskrit language, but have been scribed by using the scripts of the regional languages (like Tamil) of South India. These are chiefly the property of their respective owners, and many of these are available in big libraries. In North India, the Nadi Granthas are more popularly known as "Samhitas".

Even some educated and accomplished persons are of the opinion that the predictions obtained from the "Nadi Readings" about possible future happenings almost invariably prove to be wrong - although the readings in respect of past events appear to be amazingly accurate (and therefore the querent gets duly impressed). But this not at all a balanced view; often it is observed that people acquire lopsided views owing to their personal bad experiences, or by believing what they might have listened from people whom they respect and/ or trust. One should arrive at conclusions after gathering sufficient knowledge and information about the subject, and after judiciously considering all the pros and cons.

It is however true that many learned Astrologers have had cautioned us that there are a number of fake or spurious works available on the subject, and these imitations are heavily banked upon by some cunning habitual deceivers - most of whom possess little or no knowledge of Astrology. It should be noted that there are two different classes of Nadis: (1). Mantra Nadis., and (2). Tantra Nadis. While the latter class of Granthas (Tantra Nadis) is essentially based on age-old well-known Astrological principles - and hence merits the attention of Astrology lovers, the former class of Granthas (Mantra Nadis) is basically ‘dangerous’.

Mantra Nadis are based on acquiring control over some "uchchista" or 'kshudra' (mean or profane) deities by using the Mantras. From these Nadis, the querent obtains very accurate reading of all the major events and happenings of the past, but most of the (or even all the) predictions about the future that are given normally prove to be false when the predicted time of fructification actually arrives.

For information of the more inquisitive users, the names of the various available Nadi Granthas are given hereunder:

Certain Nadi Granthas like “Satya Nadi” (alternately known as Satya Samhita) generally deal with the lives of the great, outstanding, and illustrious persons of various fields. Whereas “Dhruva Nadi” covers the lives of all kinds of persons hailing form various walks of life.

There are basically 2 types of Nadi Granthas :

(1). The former kind deals with the actual horoscopes obtained by means of various possible permutations and combinations. “Bhrigu Samhita” is an example of this type; it is available in Hindi also. This kind of Nadi Granthas is of great interest to the serious students of Astrology.

(2). The latter kind uses certain starting points - known by the term Nadi-Amsha (which are actually 150 unequal divisions of any sign) - and go on discussing the possible events and happenings at length by taking the commencing point as effective "Ascendant". “Deva Keralam” (Chandra Kala Nadi) is such a book (available in English* also). There are many other Nadi Granthas of this category; like Dhruva Nadi, Bhrigu Nadi, Guru Nadi, Kuja Nadi, etc; but all these Granthas are not easily available.

[ * N.B.: However, one important thing deserves to be mentioned about the English version of Deva Keralam (Chandra Kala Nadi) translated by (Late) Shri R. Santhanam – which is available in the market. In this work, the 150 Nadi-Amshas had been taken as to be of ‘equal’ duration (30* / 150 = 0*12’ each) – whereas actually the Nadi-Amshas are of unequal durations, and learned Astrologers are well aware of this fact. So, while perusing this work, the interested reader should keep this deviation in his/ her mind – as this ambiguity will surely make a whole lot of difference in the readings.]

Among all these Nadis, the approach of “Dhruva Nadi” appears to be very systematic, and it is thoroughly consistent - since it is solely based on the widely known and logically justifiable general principles of Astrology. But time and again even the most learned Astrologers have stressed that the unique system of Nadi Granthas is not at all very easy to grasp - unless one has acquired indepth knowledge of almost all the available methods propounded by the great sages Parasara, Jaimini, Bhrigu, etc.

Certain Nadi Granthas like “Sapta Rishi Nadi” do not make any mention of the 150 Nadi-Amshas or their use for the predictive purposes. It takes the longitudes of all the planets and also of the Ascendant. It uses the usual rules of Astrology (of Parasara, etc). This Nadi, however, puts forward the predictions; but it does so without advancing any Astrological reasons in support thereof. As such, although the students can grasp the general principles of Astrology quite well, still at times they become quite at a loss to comprehend the mechanism involved in delineation of results. Another peculiarity of this Nadi Grantha is that most of the horoscopes discussed are of 'male' persons.

N.B.: It may not be totally out of place that some ill-informed people (who also claim themselves to be Astrologers) are trying to pass on predictions based on the so-called 'subs' (or 'sub-subs') of the K. P. System as to be of "Nadi Astrology" (!). Even some Astrology software CDs available in the market also offer such ‘predictions’ (!). The people should not and must not be misled by such deceptive claims. Neither the 'sub' nor the 'sub-sub' has anything to do with Nadi Astrology. By merely acquiring the knowledge of the K. P. system and the use of the divisions and sub-divisions of Vimshottari Dasha-system only, one can never expect to become capable of comprehending the subtle techniques involved in Nadi Astrology. Anyone will need to study a lot more, and learn much more; he/ she must also posses sharp intelligence, retentive memory, and acquire vast experience. Possessing a very good knowledge in Jaimini system of Astrology will definitely prove to be highly advantageous; even some very learned Astrologers have opined that some kind of special abilities are essential for comprehending Jaimini principles correctly.